For thousands of years, people have wondered at the complexity and beauty of the human experience. Theologists and philosophers have strived to explain it for centuries, contextualise it. Now, due to the recent surge in neuroscience studies and technology, we’re gaining a deeper and deeper understanding of our own mind.

The experience I’m most interested in is something called Flow State and specifically how it relates to our experiences in the tank. I started learning about this, not from some dry scientific urge for knowledge, but because of the possibilities of the flow altering my mind and my life!

You may or may not have heard of flow states or theta brain waves. I myself hadn’t really heard of flow, but am familiar with the timeless, spaceless quality of a good float which indicates a theta brain state.

So, what is FLOW?

The flow was described to me as a state of mind in which you perform and feel your best, characterised by increased awareness, peak performance, lateral thinking, and distortion of time. 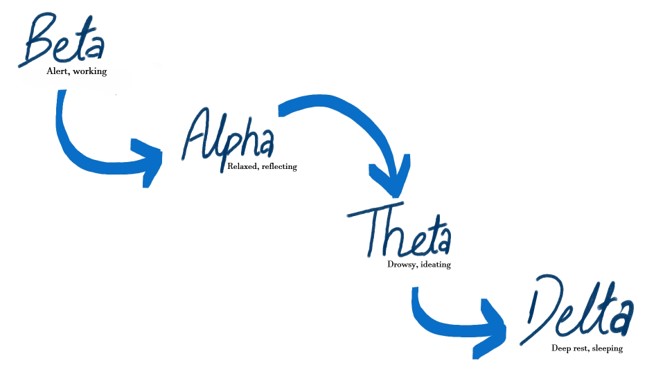 What’s amazing is that it’s available to us all. But not only that, it’s likely been felt by us all at some point in our lives, whether ‘in the zone’ during sports or ‘in the pocket’ playing music. Learning this, I instantly thought of the best moments I had playing hockey in high school.  Those periods where I was fully ‘in the moment’ and the gameplay flowed seamlessly and automatically from my body, as if I was just the observer.

Pioneer flow researcher Mihaly Csikszentmihalyi characterized flow by the “loss of self-consciousness, a distorted sense of time’s passage, and the merging of action and awareness”. He also opined that “flow is one of the mechanisms that made the evolution of humankind possible”. This is because in flow you’re opened up to massive leaps in performance and abilities. It’s believed this is because of the changes your neurochemistry undergoes in flow, and it’s the object of continued research.

This made total sense to me, recalling the times I’d effortlessly pull something off on the field which I’d struggled to attempt on a good training day. ‘This is amazing!’, I thought.

As it turns out, flow is not limited to the sports field or the arts, but accessible to anyone in the presence of certain triggers. In fact, the highest concentration of flow states is found in high-growth, high movement professional environments such as start-ups!

The most exciting discovery for me as a regular floater was the discovery that in flow we actually enter a theta brain state- for those not in the know, this is a state in which your brain emits theta waves, as compared to Beta waves in times of activity or stress, alpha in concentration and delta in sleep or rest.

The flow theta state, coincidentally, is identical to that which you enter in a deep float session.

If you’ve heard of or experienced this blissful, timeless state you’ll know theta increases creativity and rests the brain. What was news to me is that we now know why.

It’s due to a process called transient hypofrontality, where the prefrontal areas of the brain (responsible for orienting you in space, ‘I’-centred or ‘egoic’ thought, and awareness of time, among others) quieten, allowing energy to be redirected to other parts of the brain. This stimulates imagery and the ability to connect distant, unrelated ideas and fields of thought, otherwise known as creativity!

Of course, there are many things you can do to attempt to enter flow. There’s a variety of triggers you can arrange in order to induce it, meditation is one of them. But the most consistent way to experience a theta brain state is the floatation tank. It does so by igniting the parasympathetic nervous system, also known as the rest and digest response, which is the body’s response to the fight or flight response (sympathetic nervous system). It works to calm the body down from a state of tension, regulating breathing, heart rate, blood pressure, and hormone flow as the body settles into homeostasis. As a part of this process, your brain activity calms down and you begin to emit theta brain waves, entering a restful flow state.

In this float story we catch up with Israel, a champion kick boxer who has made floating a central part of his fight preparations.

Introducing i-sopod – our spaceship-like floatation pods. i-sopods are state-of-the-art Epsom Salt water pods, designed to transport the user to a new world of absolute calm and tranquillity, where you will rediscover your health, vigour and enthusiasm. Floatation pod is a powerful tool to achieve harmony of body and mind – natural, based on the […]

Letting Go: Deep Relaxation and Beyond

If you’re new to floating or find it hard to unwind, then you might be awfully familiar with the perception of ‘mind speak’ whilst attempting to relax. A regular battler – even with the physical and mental exhaustion I feel after a day’s work – I often struggle to completely rest at night, battling with […]

By now we all know the powerful effect that floating has on us.  We know that one session tends to provide relaxation for multiple days after a float, and most of us are aware that floating has a cumulative effect- that we relax more quickly + deeply when we’ve been floating on the regular… But, […]

Why getting yourself a float membership is the best thing you can do this Christmas… 🎁 TAKE CARE OF YOURSELF to TAKE CARE OF THEM: Be honest – how many years in a row have you worked yourself into feeling sick, tired + frustrated? Wouldn’t it be awesome if you didn’t do that in 2020?! […]

I first introduced floatation and meditation into my life a few years ago, and have watched myself progress through many personal lessons and developments.  I have seen radical shifts in my mood, my emotional intelligence and general awareness, and a lot of this I owe to the insights and serenity I have been able to […]

Every Float is Different

In my first float I had no idea what to expect. I was a little apprehensive yet curious. As I got settled in the tank I quickly became confronted by fear. It arrived in the form of the darkness and unfamiliarity of the tank itself, but soon I realised that it was inside of me, […]

Tank Up Your Immune System

I get sick around a week or so from deadline. It happens almost every time I work on a big project to the point where I can predict and prepare for the inevitable achy joints and headache. But as I’ve matured as a writer I’ve realised that my reoccurring flu is a direct result of […]